Here are some of the bigger things currently in development without timing or priorities. Our priorities can change at any time. This is simply a list to give members a rough idea what is currently in the works. The Steve Myers car herder blog discussed much of these things below. This list is absolutely not what is coming in next build. Maybe even coming this year and maybe never if we change our minds based on new technology available or new priorities or new view of the investment of time compared to adding the feature. Again, just things in the work plans right now for those that like to understand what is being worked on generally speaking. Also what listing below will not fill up everyone&#8217;s time for the year so many other things will be worked on and some things being worked on as well right now that not in position to share.

Also remember, that skills sets need to line up with projects if you are thinking to yourself why they are doing this versus that. In addition, some projects lead to other projects technically and that might be the real goal and what you might want. Pretty much every single technical person has unique strengths and skills. The software engineers are not interchangeable without in some cases a large learning curve, same with artists, web engineers, database engineers, production folks, oracle engineers, etc. Lastly, remember there are 40,000 people with different priorities. Our goal is simply to improve the racing and racing experience for all as best we can!

&#61656; Always working on a variety of items physics wise for the cars both generally and car specific.

&#61656; In the back ground working on updating sound system, but like last build trying to add & improve sounds in the shorter term. Also currently redoing exterior sounds on several cars like we did for V8 super car last build, for example the stock cars, Corvette and Cadillac in the works.

&#61656; Working on improving build process code, cutting the time of the dozens of builds we do each month internally in half, which will free up considerable time for everyone.

&#61656; &#8220;Race against yourself project&#8221; that we plan on putting in Time Trialing to spice it up. Basically racing against saved replays of ghost cars starting with your own laps. Possibility to add other saved ghost cars/laps to race against.

&#61656; Working on refresh & redesign of car/helmet/suit paint area on members with more options.

&#61656; Working on having Your Name on windshield for new NASCAR cars which will translate to other cars that have that in real world.

&#61656; Getting close on team and driver swap projects. Spotters done already, crew chief portion of project should be in this next build and full driver swap, team racing & creation of teams possible in July build or at least another phase of it.

&#61656; Working on graphical & dynamic graphical projects. Collideable cones and leading to parts following off cars, etc is one of the bigger ones. Also working on some graphic improvements like trees and tree shadows.

&#61656; Further work on minimizing expensive graphical processes like the way we store and deliver the graphics, i.e. shadow maps. Update on DX11: Since it is such a large project, we wanted to try to add shadow mapping into the existing engine before tackling the port to DX11 so the project has slipped a bit but on our plate for 2013. The good news is that we&#8217;ve still been improving on the Direct3D 9 engine with some good stuff. One of the main benefits of DirectX 11 should be to eliminate the CPU bottlenecks in the engine and get better utilization of the GPUs. DirectX 9 has a bottlenecked API for our scenes, and DirectX 11 sports a much improved API, which should allow us to solve these issues. Also, with DirectX 11&#8217;s geometry shaders and multiple render target support, our shadow technology should improve substantially while further offloading from the CPU. We&#8217;re also planning to build the new DX11 engine using high dynamic range frame buffers and lighting from the start, which will improve the overall appearance.

&#61656; Working towards dynamic skies & time of day change in the relatively near future.

&#61656; Working on Lotus 49, new Kia and Ruf car. (Will try and send out very early stage model pictures for Ruf) Also working on an overhaul of DP car physics wise.

&#61656; Tracks in process are Kansas, Montreal and Bathhurst. Also updating old tracks USA and Laguna. Also R&D project working on how we treat massive backgrounds (For example the mountains at Laguna)

&#61656; Working on database overhaul in background

About 100 other things want to do obviously, some big and some small and I&#8217;m sure dozens of those projects will be done or started this year and others are still way off in the future.

#44
Speaking of which, vandaag was een kleine update.

Chevrolet Impala (Not the Gen 6 racecar)

Qualifying &#8211; Qualifying begins on Monday evening February 18th, 2 lap qual every hour at 45 past the hour. Qual will last until the races begin.

Race splits will be set by iRating, order on the grid will be based on qualifying time.

The top split of this event will be broadcast live on http://www.glaciertv.com/

The top banner is editable. We'll be stamping on the manufacturer logos on the cars, but until we get our system up for putting names there, I wanted you guys to be able to put your names on there yourself.

The font Nacar is using for the names is: 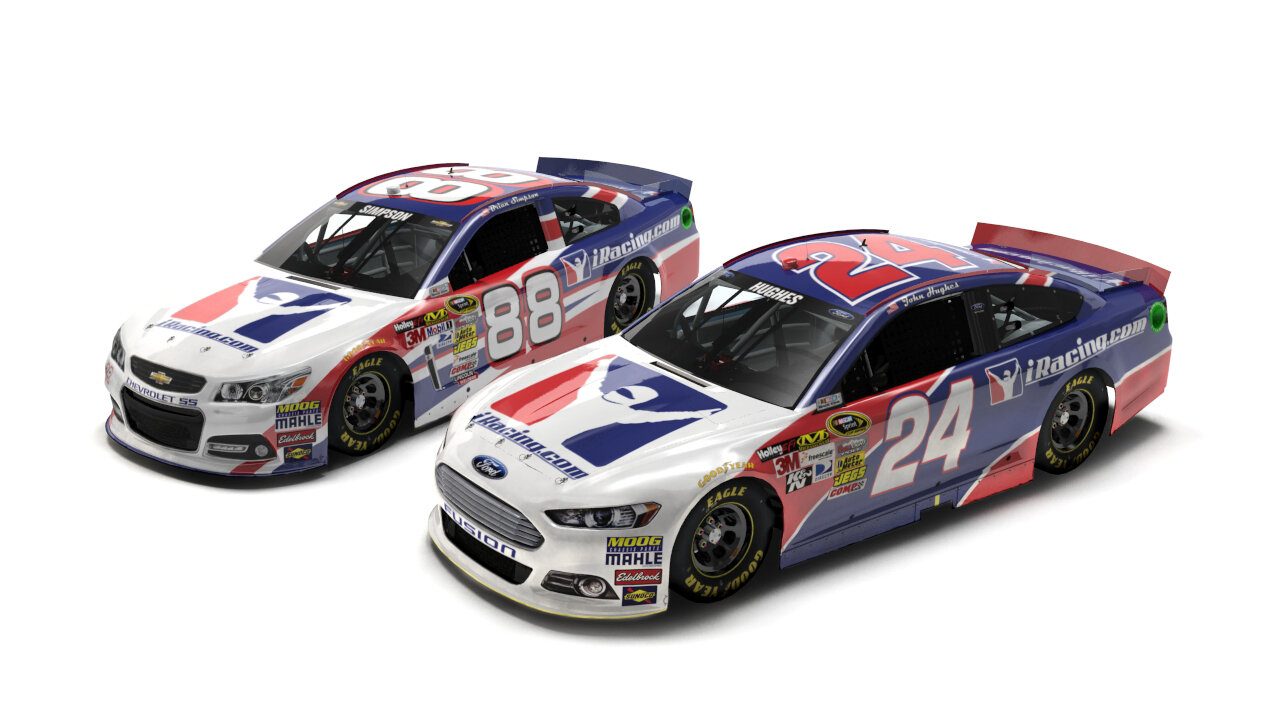